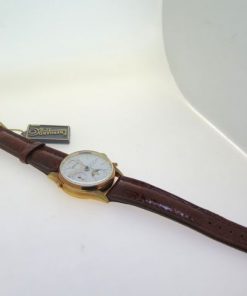 The Eberhard & Co manufacture was founded in La Chaux-de-Fonds, the historic birthplace of the Swiss watch-making industry by Georges Eberhard. Eberhard was the son of a prominent Bernese family tracing its origins back to the 10th century, which was involved in the development of the Swiss watchmaking industry. His father early initiated him to the art of watch making and Eberhard was only 22 when he founded the company.
In 1907, the company has become one of the largest Swiss watch manufacture and inaugurated its new headquarters which takes an entire block at the very center of rue Leopold Robert, La Chaux-de-Fonds’s main avenue. The Parisian-like five-stories building was designed in distinctive Beaux Arts style with a round tower topped by a large eagle sculpture has become one of the city’s well known landmark and its highest construction until the 1960s. In 1919, Eberhard’s sons, Georges and Maurice took over the company.